According to Entertainment Weekly, a business book from 1969 flew to the top of the bestsellers list after Microsoft CEO Bill Gates mentioned it as his favorite book in an essay he wrote for The Wall Street Journal earlier this month.

Bill Gates’ mention of John Brooks’ Business Adventures: Twelve Classic Tales from the World of Wall Street in The Wall Street Journal sent the book to the No. 5 spot on the Amazon Kindle bestseller list. The book was published in 1969 and is no longer in print. But the book’s publisher, Open Road, quickly made it available in e-book format, and a paperback re-issue is now slated for September. In the essay, Gates wrote “Today, more than two decades after Warren [Buffett] lent it to me—and more than four decades after it was first published—Business Adventures remains the best business book I’ve ever read.”

Will you be buying the book?

The 3 Major Problems With the ‘Fifty Shades’ Trailer

It’s the moment we’ve all been waiting for. Finally, yesterday The Today Show debuted the trailer for the new screen adaptation of the bestselling novel Fifty Shades of Grey.

While most of the online reactions consisted of women sweating it out, me…not so much. Let’s discuss.

Secondly, the music in this trailer. The music sounds like something that would be used in a trailer for a thriller — not a sex movie. With each cut, I kept waiting for Christian Grey to whip out a knife to stab her — and not in a sexy way. The music selection was simply odd. To be fair, I know it was a clip of the exclusive Beyoncé track, and I’m all for that, but it does sound scary, not sexy.

And speaking of the sex, we only get a glimpse at the very end of the trailer into how sexy this movie might actually be. Most of the trailer makes the movie look romantic. Even when we do see some of the steamier clips, they’re simply not that steamy. It doesn’t look like there’s much chemistry between the actors.

There’s no doubt I will see this movie. I read the book, and the move is bound to be a phenomenon (especially since it comes out on Valentine’s Day, 2015 and will also mean the release of an exclusive Beyoncé track), but after seeing the trailer, I’m not so sure I’m excited about it. Get back to me when we find out whether or not it will be rated NC-17. 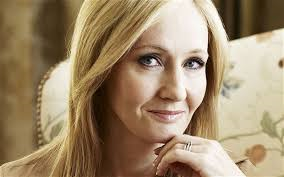 When Harry Potter author J.K. Rowling ended her acclaimed children’s book series about the most famous wizard of all time, fans worried that would be the last we’d hear from the bestselling author. But time and time again, she’s proved us wrong.

First, she created Pottermore, a web site with games, stories, and details about the universe of Harry Potter. Then she wrote an adult novel, The Casual Vacancy. She penned a Harry Potter spin-off story collection called “The Tales of Beedle the Bard.” Then came two adult crime detective novels under the pseudonym Robert Galbraith. And now there’s more.

Earlier this month, Rowling released on her Pottermore web site a new Harry Potter story, the first she’s written and released since the seventh and final Potter novel was released in 2007. According to Huffington Post, the online story describes Harry Potter and his friends in their 30s. It details what they’re up to now, how they look, and how they’re faring. It’s written in the form of a gossip column, penned by Rita Skeeter, a well-known character from the novels.

The story was such a huge deal for Potter fans that it crashed the Pottermore web site. It’s also led to speculation that J.K. Rowling would write another Potter novel. But so far, that’s just speculation.

In fact, it’s Rowling’s adult crime detective series that she’s more focused on at the moment. She’s already released two novels, The Cuckoo’s Calling and the recently-released The Silkworm, under the Robert Galbraith pseudonym. It was recently reported that she would pen seven novels in the so-called Cormoran Strike series — the same number of books she wrote in the Harry Potter series. But according to Time, she’s changed her mind and now plans to write more than seven Cormoran Strike novels, as Nolan Feeney explains:

“I really love writing these books, so I don’t know that I’ve got an end point in mind,” Rowling said at a crime-writing festival, the BBC reports. “One of the things I absolutely love about this genre is that, unlike Harry, where there was an overarching story, a beginning and an end, you’re talking about discrete stories. So while a detective lives, you can keep giving him cases.”

Rowling is apparently already halfway through the third novel in the series and has ideas for the fourth. Could this be her new legacy? Will Potter fans ever get more than the latest 1,500-word story about it?

OKAY, FOR A DOLLAR, WHAT’S YOUR GUESS ON THE NEXT BIG-NAME TO PEN A BOOK…AND MORE IMPORTANTLY, DO YOU CARE?

If you couldn’t already guess from that introduction, it’s Billy Eichner, star and host of Funny or Die and Fuse’s Billy On the Street. The comedian, who on his show, prances around New York City, screaming questions at people about what they know or like about celebrities and pop culture, has recently signed a publishing deal with Hachette Grand Publishing, according to Entertainment Weekly.

It’s not clear what the book will detail, but on Eichner’s Tumblr page, he mentioned “This book is for anyone obsessed with show business, pop culture, social media and lots of other fun topics that fill our days as we hurtle helplessly towards accidents, illness, infidelity and death.”

That’s about what I guess I’d expect from the pop culture obsessed man himself! No word on when the new book will be released.