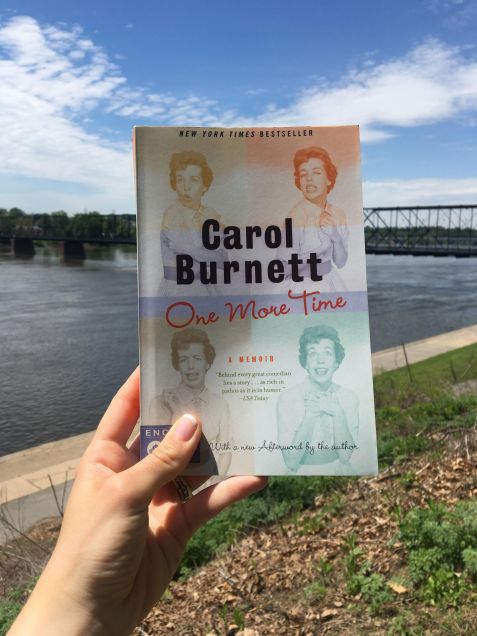 Recap: Carol Burnett is one of the truly great comedic icons and badass females of her generation and of our time. I was first introduced to her as Miss Hannigan from the original movie version of “Annie,” one of my favorite movies to watch growing up. She was perfect as Miss Hannigan — a villain who was more pathetic than evil, who was hilarious in her awkward gawkiness and who I was glad to see have a happy ending because you knew she wasn’t really a bad person at heart, just a desperate one. Having finally gotten around to reading her memoir from the 1980’s, I’ve come to learn that Carol Burnett was really not that different from the character she played in “Annie.”

She grew up under pretty horrible circumstances, though she didn’t realize as much until she was older. Her parents divorced at a young age and she lived with her grandma since her mother couldn’t properly take care of herself, let alone another person. When her grandmother and she finally moved to Hollywood from Texas, where her parents were already living separately, Carol started to standout as the tall, funny girl with the imaginative mind. When her illegitimate half-sister was born, she took her under her wing as though she were her own. She cared for her while focusing on her schoolwork and a potential career in journalism.

But as we all well know, things changed, and one taste on the stage had her itching to act forever. Her drive, devotion and ambition led her to UCLA and acting troups across California. A performance, a nice man and a lot of luck helped her earn enough money to go to New York and embark on the career she always wanted. But even that wasn’t as easy as she dreamed.

Analysis: Carol Burnett is a living, breathing rags-to-riches story. Yes, some of her story involved some extremely generous business men who were able to help her financially or give her references. But Burnett defined making her own luck. If not for her whipping personality, spunk and obvious natural talent and work ethic, she wouldn’t have had guts to ask for help or to keep in touch with the right people who would help her along the way.

It was amazing to read about her childhood and realize the hardship she had to overcome. Lots of “mommy issues” and lots of “daddy issues” could have been enough to break anyone. Not Carol. The entertainment industry itself is enough to break people. Not Carol. Her positivity and determination are to be admired, let alone her comedic chops. While she often talks about her many fears, it’s obvious that she’s also fearless.

Her story is more unbelievable than I could have imagined, and her writing exquisite. That’s not always the case with “celebrity” memoirs. But the truth is she was always a storyteller of some kind — acting out scenes, telling stories. Writing is another way to do that, and she’s obviously very good at it. (It’s no surprise she initially wanted to be a journalist — she has the chops.)

The updated version of her memoir, which I eventually read after accidentally leaving my first copy on a plane (whoops!) was even better because of the epilogue it includes at the end. The epilogue was added years later and tells the story of some of the additional tragedy she dealt with in her adult life. While sad, it’s an important section of the book that makes a point of showing no matter how successful you are, no matter how hard you’ve worked or where you’ve come from, we’re all people and we’re all going to have hard time to work through. Like Carol, we’ve got no choice but to keep going. One more time.