It’s everywhere lately, and it’s only going to become more prominent: politics. In this big political year, the men — and women — of Washington are doing what they can to inform the people. But those people also include children. Now children’s books written by the wives of the politically powerful men in Washington, D.C. are all the rage, the newest political trend.

According to this article by The New York Times, former Vice President Joseph Biden’s wife, Jill, is publishing Don’t Forget, God Bless Our Troops under Simon & Schuster. The profits from her book will go toward charities for military families.

But Jill Biden isn’t the first to touch on this seemingly strange, but actually brilliant form of political campaigning. Laura Bush and Hilary Clinton have both written children’s books. So have Callista Gingrich, Lynne Cheney, and Carole Geithner, Timothy Geithner’s wife. And for that matter, it’s not just wives who are jumping on the bandwagon; it’s also daughters like Jenna Bush and Caroline Kennedy.

Most of the books have political undertones, which is why this election year, there seem to be more “Washington Wife Children’s Books” than ever. It’s all part of the process as Pamela Paul explains.

“Picture books and books for tweens are always a great way to put complex issues like politics into a context that young children can understand,” [HarperCollins Children’s Books editor-in-chief Kate Jackson] said. “They get the conversation going.” For Washington wives, writing a children’s book has become almost an expected spousal counterpart to the politician’s campaign tract or argument book. “Spouses have one mandatory obligation — ‘First Do No Harm’ — and one optional assignment: provide a positive magnifying force,” Mary Matalin, editor at large for Threshold Editions, a division of Simon & Schuster, and a former member of Dick Cheney’s staff, wrote in an e-mail. “Children’s books fulfill both.”

Not all the books are political — like Carole Geithner’s, for instance. But for those that are, it’s a smart move because it not only teaches children about politics in an understandable way; it also gives children something to talk about with their parents. And that makes those voting adults think even harder about who they’re voting for, and what those people represent.

Review: The Audacity of Hope 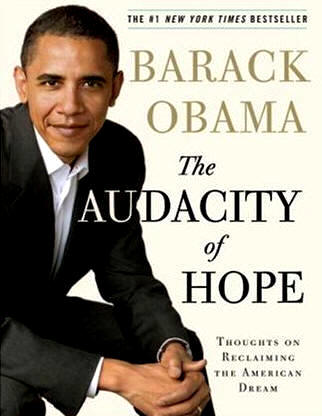 ***Note: This is a political book (my first). As a journalist, I’ve tried to maintain an unbiased view and write an impartial account of this book.

Recap: In then-Senator Barack Obama’s second book, The Audacity of Hope, Obama addresses a multitude of topics, clearly paving the way for his Presidential campaign. Obama details his journey through politics — why he decided to run for Senator, his failed run for Congress, and what it was like to take office in the U.S. Senate.

But the book isn’t only a story about how he got where he is. It also details his plan for America, the plan that he hopes would steer the country back in the “right” direction. That plan includes changes to national healthcare and education, a bipartisan relationship between Republicans and Democrats, and restructuring of the U.S. economy. To put it bluntly, Audacity touches on the issues that Obama is still speaking about to date. The book was published just months before announcing his run for President, and that’s obvious here. After all, all of his platforms are covered and discussed in depth. He talks about his meetings with constituents, his travels around Illinois, his view of things, and his plans to change things.

Intertwined among what reads like a speech are some personal anecdotes that we long to read more about.

Analysis: As audacious as Obama claims hope is, he still appears rather hopeful throughout the book — hopeful, but realistic. He sounds optimistic about the future of America, though he emphasizes the harsh reality of what’s wrong with the national system. He maintains that a great deal must be altered before the United States can reach its full potential.

Aside from his political platform, Obama also uses the book to describe the work of past Presidents — that which he admires and that which he doesn’t. To be quite honest, I lost interest at these parts. My lack of familiarity with the work of former Presidents and my minimal knowledge of politics made it hard for me to keep up.

But what I enjoyed were the poignant pieces of Obama’s personal life that he chose to share — moments he’s had with daughters, how he met Michelle, the First Lady, and one of the encounters he had with former President George W. Bush. Much like he did during his Presidential campaign in 2007 and 2008, Obama wins the reader over with his passion and down-to-earth likability. Especially in retrospect, I didn’t care to hear about Obama plans for Presidency, but rather what he’s like in the “real world.” The same appeal that won votes in 2008 is what wins readers here.