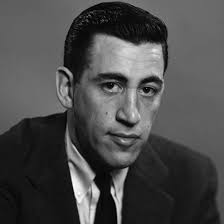 J.D. Salinger died about four years ago, but just like Tupac and Michael Jackson, lots of his work is getting traction posthumously.

According to Entertainment Weekly, the author best known for his classic novel Catcher in the Rye had a number of short stories leaked not too long ago. Salinger’s stories, “The Ocean Full of Bowling Balls,” “Paula,” and “Birthday Boy” were traced to an eBay auction that ended in September. The previously unpublished stories were sold for a mere 67 pounds ($110).

Before the leak, “The Ocean Full of Bowling Balls” was only available at Princeton University. The other stories were available at University of Texas’ Harry Ransom Center.

Through an agreement with Princeton University, “The Ocean Full of Bowling Balls” was not meant to be published until 2060, 50 years after J.D. Salinger’s death. The story was originally published in Harper’s Bazaar and is thought to be a sort of prequel to the beloved Catcher in the Rye.