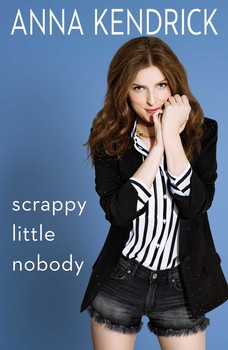 Recap: Actress and singer Anna Kendrick proves she’s as funny as you think she is in this bestselling memoir about her path to becoming a Tony and Oscar-nominated actress, best known for her role in Pitch Perfect. Like Tina Fey’s Bossypants, Scrappy Little Nobody reads as if Kendrick is speaking to you with silly lines that you can hear in her voice like “if i saw ‘advanced’ in the corner of a Martha Stewart Living recipe, I’d think, Bring it on, you crazy bitch” or “Player WHAA.”

Her memoir tells her story, including growing up in Maine and becoming an unlikely child star on Broadway, being nominated for a Tony, continuing to work in theater and then movies, dating guys, losing her virginity, meeting celebrities, and being nominated for an Oscar while still not being able to afford food or toilet paper. But it also includes more introspective stories as well, about mourning her grandmother while shooting a movie, about witnessing Drew Barrymore having a “moment” to herself after winning an award, about getting advice from acting legends, about dealing with her anxiety.

Analysis: It’s too much for me to count the number of times I laughed out loud while reading this. She’s witty and silly while still being analytical and finding subtle ways to let the reader into who she really is. She also tells stories in great detail. She described premiere dresses, scenes from movies, references to camera shots during awards shows in such a fun way, I found myself Googling photos and YouTube clips so I could see everything. She wrote the book, knowing that would happen too, specifically when she includes a photo of her stoned at that red carpet and wrote “Here’s a picture of my stoned face, so you don’t have to Google it later.” (How does she know? She just does.)

Scrappy Little Nobody includes all the things a celebrity memoir should: fun facts about shooting her most famous movies and skits — like how she lost her shoe while performing at the Oscars, the complete ridiculousness of being famous — like how she showed up stoned to a red carpet about a brief hospitalization,  what it’s really like to work with Zac Efron (spoiler: every bit as incredible as you think), and the fact that she’s just a real person who often can’t believe her life is her life.

Get Scrappy Little Nobody in paperback for $8.06.