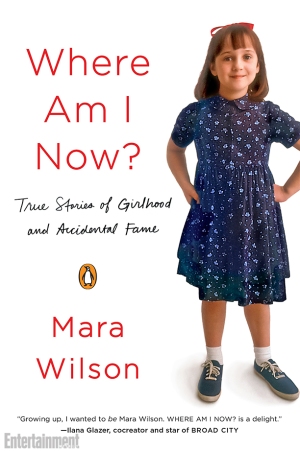 You may not remember the name Mara Wilson, but you’ll remember her when you see the cover of her new book. The now grownup, out-of-the-limelight child actress is due to release a book of essays in September about growing up as the girl who starred in both Matilda and Mrs. Doubtfire, among other movies, according to Entertainment Weekly.

Mara Wilson has left the industry, but apparently has become quite the witty writer over the years. Where Am I Now? will include anecdotes about Wilson’s first kiss, learning about sex, her mother’s death and accepting herself.

She’s one of those people whom I forgot existed, but I was such a huge fan of her movies growing up, I can’t imagine not reading her memoir. I’ve got to think she has a lot of interesting stories to tell.

‘Hamiltome’ Sold Out on Amazon 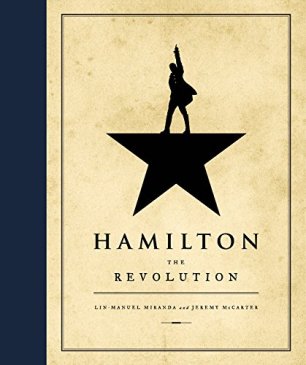 Three days in, and the long-awaited book Hamilton: The Revolution — nicknamed Hamiltome — is already out of stock on Amazon, according to Entertainment Weekly.

The book, by Lin-Manuel Miranda and Jeremy McCarter, is the entire script of the smash Broadway hit show Hamilton, including annotations by Miranda. The audiobook version of it is partially read by Miranda and — funnily enough — by apparent Hamilton super fan and actress Mariska Hargitay.

Grand Central Publishing has already ordered its third printing of the book. Those who order it now will have to wait about nine to twelve days to get their copy. In the meantime, here are some of audio clips from the book to hold you over until you get your copy!

Place your order for Hamiltome in hardcover for $24.

Recap: Anna Ray has a secret. For years, she’s carried it around with her, and every on February 17th, she relives the same traumatic incident from her childhood that she can’t talk about. And then she relives the other traumatic incident from her adulthood — the day her husband killed himself. Those two deaths have permanently cursed February 17th for her, only to be made worse when yet another person she knows well dies on the very same date.

Her cousin, Jeannie, has already flown in to stay with her for the week that haunts Anna so much. Now the two of them together become wrapped up in a murder investigation a professor at the college where Anna works. He just so happened to have had a crush on Anna and used to date Jeannie. Investigators won’t leave them alone, even as one of Anna’s students becomes a prime suspect in the case. But the date and the baggage of February 17th also won’t leave Anna alone, and ultimately she has to come to terms with what this all means for her.

Analysis: Author S.G. Redling does a good job of showing us how torn Anna and Jeannie’s characters are and how much baggage they really have. But with all that baggage, it was frustrating to me that the reader doesn’t learn exactly what happened in Anna’s past until the very end. I think it would have made the story’s climax more climactic had we had more insight beforehand. The details about that traumatic childhood incident also could have been explained more plainly — I found that section a little confusing and had to re-read it several times.

That said, Redling builds great suspense as the end of the novel nears, and it has a very Gone Girl thriller feel. The twist at the end is great mystery writing and exactly the kind of twist any reader hopes for. The relationship between Anna and Jeannie is also great, though I found it hard to believe that growing up, Anna never told Jeannie exactly what happened on that February 17th of yesteryear.

MVP: Jeannie. She’s a bit of a hot mess, like Anna, but she’s there for her. She’s a good role model for Anna and completely nonjudgmental, which is exactly the kind of woman Anna needs in her life. 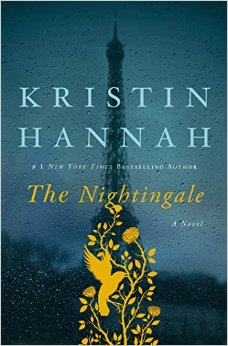 Recap: Viann and Isabelle are two sisters at different points in their lives, who are both dealing with the same struggle: surviving in Nazi-occupied France during WWII. Just because they’re not Jewish doesn’t make things any easier. Viann and her daughter are forced to house a Nazi while Viann’s husband fights in the war. While she prays daily for her husband, she also must continue teaching students at school and being the primary support for her Jewish best friend and neighbor. She carries on with her duties while watching her hometown fall apart and witnessing death and destruction.

While Viann tries to get through each day, Isabelle decides she must do something and joins rebel group. She moves back to France to live with her father, with whom she has a tumultuous relationship. After months of passing notes between other rebels, she takes up an even greater cause: saving injured foreign soldiers by leading them through the Pyrenees Mountains into Spain.

The story goes back and forth between WWII and a time 50 years later, when one of the sisters considers returning to France for the first time since the war.

Analysis: As much as I love books, it takes a lot for one to make me cry, and The Nightingale had been sobbing, but not in a depressing way like My Sister’s Keeper, and not in a unnecessarily depressing way like One Day. The ending of The Nightingale was simply so perfect, so beautiful that it brought tears of joy to my eyes in the best way. These sisters suffered through so much and made so many sacrifices. Their lives didn’t go the way they wanted or expected them to, but the way they lived them was worth it in the end. Without giving away too much, it was just beautiful.

The mystery of which sister was telling the story 50 years later kept me turning pages as much as their own individual stories. Even the less interesting sections about Viann cooking dinner were still fascinating because of the greater issues going on around her.

I also loved that this was a Holocaust fiction novel about two non-Jews. It makes it obvious that even for the groups that weren’t targeted, there was still so much pain and anguish, and that’s not something we hear about too often when reflecting on Europe during WWII.

MVP: Isabelle. She received the least amount of love. Her family constantly pushed her away. She never received the support she needed or deserved. And yet, she showed more love, gave more support and exhibited more strength than any of the characters in the novel. She made life possible for so many people, and that cannot be ignored.

Get The Nightingale in hardcover for $16.13.