Happy birthday, Christian Grey! And happy day to fans of the Fifty Shades of Grey series, who already got their hands on the latest novel in the series, Grey. The novel was released today, in honor of the main character Christian Grey’s birthday.

But before the clock struck midnight, Grey was already a bestseller. According to Entertainment Weekly, preorders helped it shoot to the top of the Barnes and Noble and Amazon bestseller lists.

But just because it’s a bestseller doesn’t necessarily mean the book is that great — as we all know. While the prose of E L James has been criticized in the past, it seems her writing hasn’t gotten much better this time around, according to the tweets copied on US Weekly.

So will you be reading it?

Get Grey: Fifty Shades of Grey as Told by Christian in paperback for $9.89.

You thought it was a trilogy too, right? Well, we were wrong.

According to her Instagram account, bestselling erotica author EL James has more in store for her millions of readers with yet another Fifty Shades novel due to be released in — get this! — just a few weeks! She’s pulling a literary Beyonce, dropping the new novel with virtually no notice!

The novel will tell the story of Christian Grey and Ana from Christian’s point of view. According to USA Today, this idea of a trilogy companion novel written from a different character’s perspective is becoming common practice these days, as Veronica Roth also wrote one for the Divergent series and Stephanie Meyer wrote one for the Twilight series.

“More” is a word that echoes so much through the book Fifty Shades of Grey and its film adaptation. Fifty Shades follows the journey of a young, naïve college student named Anastasia Steele, who’s on the verge of graduation and starting a new life. Instead of typical post-grad problems, Ana stumbles into a man and a relationship that prove more daunting than finding a job. Christian Grey beguiles Ana. He is immensely attractive, and for the first time in her life, she wants to be kissed. In fact, she wants “more” with him. But falling in love isn’t always “hearts and flowers,” and Christian isn’t your typical boyfriend. He’s a well-known, billionaire CEO whose lifestyle is bizarre, scary and confusing.

The story isn’t just “mommy eroticism” as some have speculated. If the story were solely about a dominant/submissive relationship, it would not have the worldwide acclaim and support it has today. The story shows that love isn’t always simple. It isn’t always about making easy choices. You have to ask yourself what you are willing to change, give up, perhaps even open yourself up to for the person you love.

With a phenomena like Fifty Shades of Grey and the controversy and awe that goes with it, the next step — naturally — is a film adaption. But this isn’t your typical screenplay transformation. This project had the possibility to be a lose-lose scenario when you consider the disappointment dedicated fans could potentially face if the movie was not handled properly, as well as the countless moral, religious, judgmental groups that would be chomping at the bit to condone its very existence. As an educated Fifty Shades fan, I consider the film a tremendous success.

While significantly trimmed down from the book, the movie says so much more than the dialogue on screen, speaking volumes about the story and the relationship between Christian and Ana by not speaking at all. Jamie Dornan proves a master of the closed-off, guarded Christian Grey, conveying pages of dialogue with a series of looks. Christian Grey, at his center, is an often unreadable persona. Reactions of a “lack of chemistry” between the stars demonstrate the lack of understanding that comes from knowing the character of Christian Grey. This is a man who doesn’t understand love. He’s damaged and broken. Key components and quotes from the book were not left out, and fans should feel very satisfied.

As both a fan of the series and someone who understands the moviemakers’ desire for a large profit, the ending was perfection. You are not meant to feel at peace after this movie because that’s not how their story is. It’s wrapped in ups and downs and a lot of layers and this movie needed to set the stage for everything that comes down the line, and it did that perfectly. The movie is witty, and Dakota Johnson (Ana/Anastasia Steele) was perfect for the role. She brought comedic timing to an often dark story and lightened the mood many times. Jamie Dornan brings Christian to life. He is the perfect combination of steely and endearing. Fifty Shades of Grey was made for the fans, and that shows. If you know the story you can’t help but love this movie. People will judge what they do not understand. I never imagined I’d be a part of something so doused in controversy, but I am extremely hopeful that reviews like this take the stigma and the shame out of this story that shows love isn’t always black and white; sometimes it’s grey and on even rarer occasions it’s “fifty shades” of grey.

Get Fifty Shades of Grey in paperback for $8.97.

Filed under Movie vs. Book

The 3 Major Problems With the ‘Fifty Shades’ Trailer

It’s the moment we’ve all been waiting for. Finally, yesterday The Today Show debuted the trailer for the new screen adaptation of the bestselling novel Fifty Shades of Grey.

While most of the online reactions consisted of women sweating it out, me…not so much. Let’s discuss.

Secondly, the music in this trailer. The music sounds like something that would be used in a trailer for a thriller — not a sex movie. With each cut, I kept waiting for Christian Grey to whip out a knife to stab her — and not in a sexy way. The music selection was simply odd. To be fair, I know it was a clip of the exclusive Beyoncé track, and I’m all for that, but it does sound scary, not sexy.

And speaking of the sex, we only get a glimpse at the very end of the trailer into how sexy this movie might actually be. Most of the trailer makes the movie look romantic. Even when we do see some of the steamier clips, they’re simply not that steamy. It doesn’t look like there’s much chemistry between the actors.

There’s no doubt I will see this movie. I read the book, and the move is bound to be a phenomenon (especially since it comes out on Valentine’s Day, 2015 and will also mean the release of an exclusive Beyoncé track), but after seeing the trailer, I’m not so sure I’m excited about it. Get back to me when we find out whether or not it will be rated NC-17. 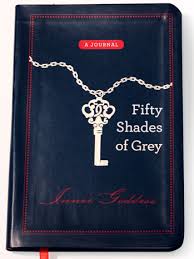 So you loved Fifty Shades of Grey and its author E L James. If so, you’re in luck. Vintage Books has announced E L James’ latest project, and it’s due to be released next week.

According to Entertainment Weekly, bestselling author E L James is releasing a leather-bound journal called Fifty Shades of Grey: Inner Goddess (A Journal). The journal will offer tips and advice on what E L James does — no, not sex — writing. It also includes blank lined sheets so readers can make notes and keep track of their thoughts while reading.

The journal will be available May 1st.

Though E L James is not particularly known for her great writing, I imagine women will eat this up as yet another way to connect with the author, the Fifty Shades books, and their “inner goddess.”

According to Huffington Post, James is working on a few other projects right now, including a book outside the scope of the Fifty Shades trilogy. She told the New York Post it will be less raunchy and that she’ll likely write it under a different name. That’s not to say that there will never be a return to the Fifty Shades story and its characters, but James says it certainly won’t be in the immediate future. She’s told other media outlets, however, that these stories will still have to do with love.

Here’s my issue: as many of us know, E L James is not known for her prose. She’s known for her content, not quality of writing. If she publishes this new book under a different name and doesn’t use the “author of Fifty Shades of Grey” title to help her sell copies, I have to wonder how well the book will do — unless of course, she surprises us with a vast improvement with her literary skills.

I’d love to ask my readers here if they’d read E L James’ new book, but by publishing under a different name, will we even know the book was written by her?

Sorry, Potter fans. Hunger Games fans are better than you …in terms of Amazon sales anyway.

According to Deadline, The Hunger Games trilogy is now Amazon’s top-selling book series of all time, outselling Harry Potter. Sales numbers include both physical books and e-books. Exact sale numbers are not being released, according to The New York Times.

Another close call on the list? No surprise here: E.L. James’ Fifty Shades of Grey trilogy, which is still number one on The New York Times bestseller lists for print, e-book, and paperback trade fiction.